Tatting, quite an interdisciplinary craft

Where to start? I like to feed my blog with tatting images, patterns, ideas. This time will be a different. I am way to new in this beautiful tatting world and my voice should be not loud, but I was educated with a big default: when I see an injustice I have to react.
Unfortunatelly, in the last 2 months I had to react 3 times. There is some sort of pattern in this.
Normally I am quiet when someone posts his/her own work after a known pattern. I do not have the right to do it. I did it maybe too, when I was learning. I also have to confess the sinn of having copied something I liked very much, saved in my computer with no mention what so ever about the source or the pattern.
Big, big mistake. Now I can say it.
I should have known better from my linguistic studies: copy 1 book, it is theft, copy several ones and compile the information, it is an original study.
I remember myself 2 years back, when I discovered tatting. Dit you not have also this compulsive need of saving everything you saw? Pictures, patterns, links (yes, I had a file with links wich grew and grew and grew until I got smarter: bookmarked the pages, so I ended up with a huuuge list), they all got in folders, and subfolders, and other folders.
It all went like this until I started the blog. Then somehow the bookworm in me remembered some esential things about information: I realized that I cannot just publish anything I want, unless I own the rights of it or if I quote the source or ask for the permission to use the info (pictures included).
Why this intermezzo? Because of the last hapenings. Yes, there are "hapenings" in tatting. A good hapening is the release of a book. A bad hapening is the theft. And unfortunatelly the last one repeated 3 times, with 3 Italian magazines.
For the first one, it is was Tattsabug with her Owl needle pattern, remember? And the turtle from Handyhands. Got over it a bit, they were free patterns, and so often done, they are common territory, the source is often forgotten. Like the 5 or 6 petals rosette.
The second one was a bit different: Jane Eborall was affected, with her beaded ladybird pattern. Edda Guastalla traced some more patterns from this magazine, like the Cherry blossom of Grace (and Grace had the honnesty in 2013 to admit that she was not that original with it, although she was not inspired by any other pattern). All of them still free.
I do not want to mention that it is common sense to verify a bit and to mention the author. Any publisher should know better. Not my speciality.
I even remember that I was so "échauffée" and I said "They copy everything! The next one will be one of the patterns of Marilee Rockley?!)
I am so sorry I said it. It was the case with this magazine, announced for end of April.
Not 1 pattern, but at least 3 patterns of Yarnplayer (Marilee Rockley) I can identify on the cover. For the 4th I am not sure... This time, it is huge, in my eyes. The Carnival earrings I don't know for sure, but 2 of the patterns, the Rotation Pendant  and The Blue tatted necklace (lila on the cover) are protected by copyright, and they can be purchased in the Etsy shop of the pattern designer.
I only hope justice can be done. 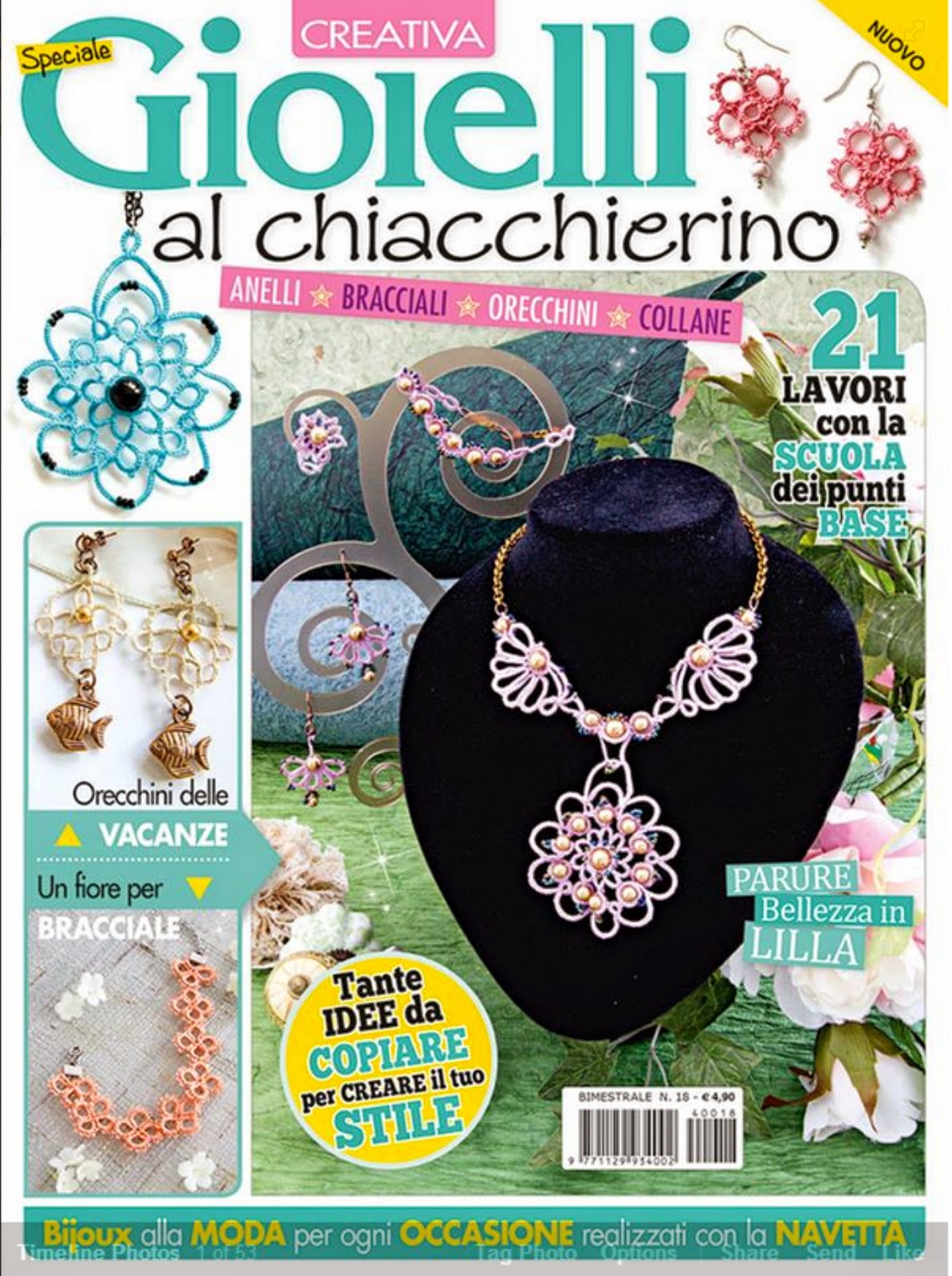 The publisher will try to hide behind the nice saying: "We published only the result of the work of our collaborator." But in the shop it is so clearily said: "you may NOT distribute the pattern"...
This makes me sad; beyond sad, actually.
I imagine how it worked: the publisher decides to make a tatting issue, then they contact a tatter and convince her that it is legal to publish the pictures of her work. They OBMIT to tell that publishing the pattern IS ILLEGAL. I am not talking about moral or ethics anymore, we get with this this one in the grown-ups world, folks.
A designer spends time, material to design a piece, to test it, to work it 2-3 times untils it lays perfectly. And he/she spends again time to verify and to prepare the pattern. As we know Marilee, she also makes stunning pictures and tutorials, and gives also the technical explanations for the steps. This IS TIME AND KNOWLEDGE. And then putting all toghether that we have a well done pattern to follow. For some of her pieces we are so blessed: they are offered generously. The other ones are sold. And the one who wants them HAS to BUY them. The pattern for Rotation pendant costs something like 2,55€. Do you think it is an unfair price? Me not.
It would be time that when we put the shuttle in the hands of someone, we should also teach some discipline in getting inspired, teach not to miss-use a pattern, not to steal. That there are some rules to respect.
I would start by sorting the information we choose to save in our PCs or tablets, you name it. It is not that hard to re-name a file we choose to save. And when we publish the picture of our work, we should not forget to mention the source if inspiration. So simple. It takes some seconds. But this shows respect.
I love the tatting groups from FB I am in. I do not want them to get lost, but do not expect that I keep quiet when I see something like this occures.
As I said: I do not know how to write Italian (already known fact), but I can copy the entire Divine Comeny with no mistake. Do I have the right to say that the text belongs to me, only because I know how to put some letters on the paper?

P.S. In the meantime, the picture dissapeared from the FB thread. The comments are still there.