Claudia Meza posted during the last week the Christmas Berry wreath of  LaRae Mikulecky and challeged us to make it.
Looked at the pattern, I admit, not to much at the text, mea culpa. Big mistake.
I tried to tat it, not that difficult. The first round came up pretty well, I got some pretty decent Josephine knots: 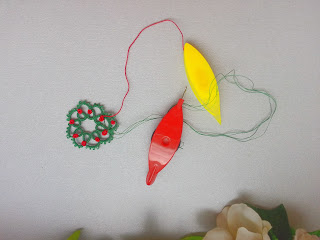 It was any way a test, only 8 rings and I did not pay to much attention at the picots (do not like them too much, anyway).
After the first outer chain I stopped. Dit not like it at all. Instead of a nice, continuous chain I had 2 chains, both with own will. See? Clumsy! 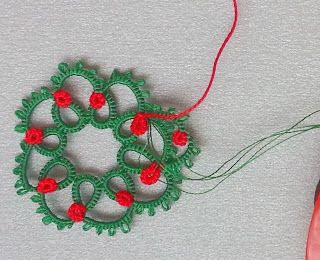 What I did was turn the work to make the JK, it seemed logical to me.
Some days later I got a precious hint from Ladytats (you really must  see her version!) : do not turn the work to tat the Josephine knots for the outer chain and some other small tricks. And IT HELPED! Thank you soo much!
Still a lot to improve, especially when making the picots before or after the JK, but it works: 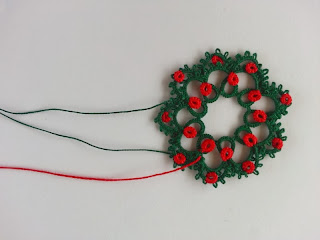 Tatted this time with Anchor (my order for Lizbeth got somehow lost in transition... some sticky hands in the customs, I guess). It is the same 12 Anchor, but obvioulsy the red thread is thicker than the green one.

During the days I had to take my mind away from the first "tatting disaster" I fooled around and I came up with this little something. I think it will end as a medallion or a bell... Have to see. And definitelly, for the last ring I have to re-think... First the chain and then the ring, like this I will have a better symetry for a bell. Do not look too much at the center, it was a test of, let's say, "mixed media". 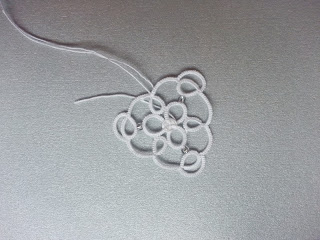 And I played with the snowflake with bugles, have to work a bit more, re-think the ds count, because it needs help to lay flat. Added the green seed beads on the second shuttle and played: I rushed, of course, like for all my tests, and one bead remained without the outer chain: 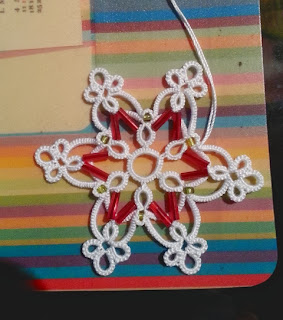