Ring on ring exercice turned into a bracelet

Since quite some time I want to learn the Ankars technique. I felt that there is more than tatting and sewing in it, but I had the confirmation while I was attending the on-line Ankars class with Nina Libin (Big, big THANK YOU to Georgia Seitz).
The material is a bit different, it has to allow to work tighter stiches and very, but very large rings. From the beggining on, my coton perlé was not the best choice for it. You can see easily why, in the picture bellow.
The first class was about the ROR (Ring on ring) technique. The simple ones, we know them from the layered rings. I found a very good example here.
The complex variant of the ROR is not that difficult, in my eyes. The first picot on the larger ring is used to join the first layered ring, and the second picot serves to join the third ring (through the second ring!). And, voilà!

I had to practice. My first problem were the large rings, the 49 - 7- 7- 14 ring was a true killer, because I tat anyway tight, but doing it tighter, as Nina Libin told us, made the job very difficult for me. After the class I grabed the shuttle with my Lavsan thread and did the exercice. Did not work at first. Small breack, a short, angry look at the shuttle: IT HAS to work! So I wrapped a larger amount of thread and started a ring. Yes, the 49 ds one... Because I did not have to pull the thread to enlarge the loop so often, my stiches got more even, the thread did not have any unwanted twist and I was able to close a nice, huuuge ring: 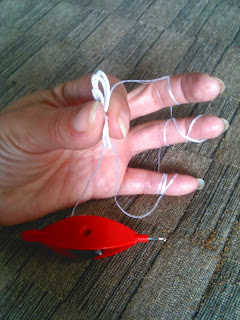 I used then this for a bracelet, done with silk thread: 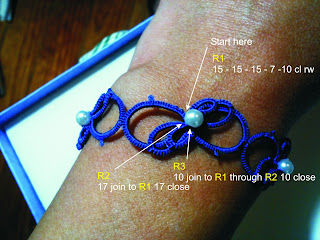 The first part of the element is done. The second one is mirrored.

You should make sure that the smaller rings stay below the bigger one. I tried the other way around, it is possible, but working them under the bigger ring is easier for me.

I left a larger amount of thread to sew the pearl.
The bracelet has six elements like this. 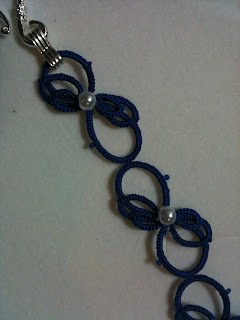 It is not spectacular, but I'm happy about the result.I was suggested that a nice pair of earrings and a necklace will do a nice set.

I have an Pinterest account, like most the Internet users. It is not only a personal collection, it is, for me, a way to organize what I want to do.
While browsing for patterns I found this edging (click on the image, you will get to be-stiched.com page):

What I did, was to adapt the double stiches for my beads and changed the orientation of the chains. I did not use any bead for the tatting, the pearls are sewed, like in the Ankars technique.
This is the base of my Duchess set (bracelet and earrings): 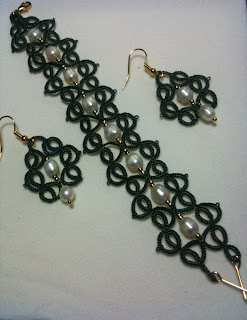 The pattern for the bracelet would be:
Ring 16 ds cl rw
Ring 10 p 10 cl do not reverse work
Chain 8 - 8 join to picot rw
You should end up with the chaines on the both sides of te rings, one on the left, the other one on the right side.
The picot of the first chain will serve as a join picot for the second side of the bracelet. It will let you a gap, just right for a bead to get in.

The earrings have the same pattern. The trick is here: 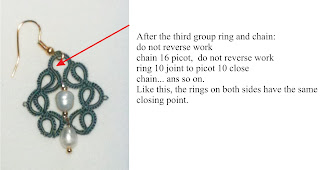 Hope it helps a bit.
If there is a mistake in the pattern, please let me know. I wrote it down from memory. I should really make notes of what I do, like this I would have, sometimes, less stress...