Pattern for the pendant

I was fooling around with seed beads latelly, a bit too intensive. I made a lot of tests, small elements. All piled up in my box and I had to use them, somehow.
So I put two of them toghether, with a pearl. As simple as that. Nothing new, almost boring. 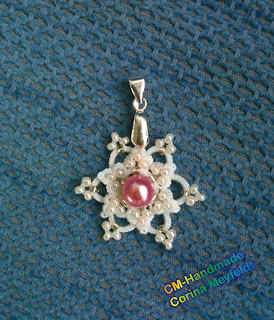 It is a normal small 6 petal flower, done with 1 shuttle.
String 24 beads on the shuttle. Take 3 beads and make the loop for the ring. Start ring, 8 - 8 bring the 3 beads from the loop and take a bead from the shuttle, make a bead picot, 8-8, close. Guess anyone has done it at least one time. 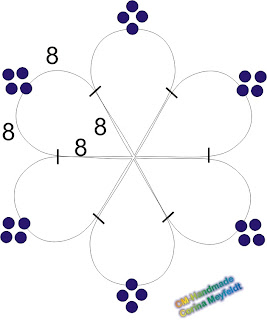 The tricky part is the middle element.
You work with 2 shuttles or 1 shuttle and the ball.
String 24 beads on the shuttle. Take 18 beads and make a loop to start a ring. You must have 6 beads left on the shuttle.
The first round (the black one in the pattern) is a ring.
3 ds, bead picot (3 beads + 1 bead from the shuttle), 3 ds, picot, 3 ds bead picot (as previous)... repeat until the beads from the loop are used, close the ring.
As you see, after the last beaded picot, there are only 3 ds.

Second round, all chains. (red line in the pattern)
5ds lock join between the beads, 3 - 3, lock join around the upper bead, 5 ds lock join to the picot. 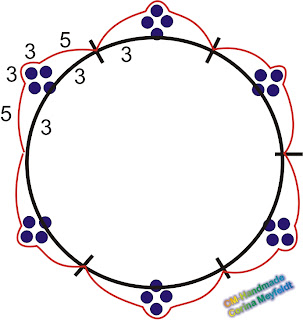 When you make the picots from the ring, you might consider to make it a bit bigger, so you can find it easily after the ring is closed. When closed, the beads will tend to hide this tiny picot. Good light, a fine hook and a lot of patience can help. I am sure, you will find  away to do it.

I tried to add 1 ds between the picots of the first round, but the size of the ring is not a good one. At least, for the thread I used, the tiny one, it was not nice to see.

Disregard, please, the proportions of the second pattern... I did not find a better way to do it.

What is left, is to sew toghether the 2 parts. Done. I think it would make a nice, sparkling Chrismass decoration too.

Have fun, if you will try it.