I got the first introduction to the swap idea some time ago. I wanted to give it a try, so I put my name on the list. The hard part was about to come, working for it. It is one thing to give life to your ideas freely, just let my shuttle to make the ds as they fit better and a completelly other thing is to think: does it fit? does it bring some joy?
Preparing a present for someone you know is sometimes hard, but for a complete stranger is for me even harder.
I put up my head and hands to work ant I made a shy tatted necklace and a bracelet. Simple lines, no picots, just pearls and golden chain. The necklace is not symetric and the pearl in the center floates somehow but that's the charm of it... 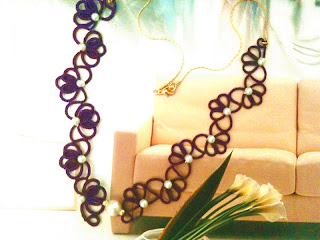 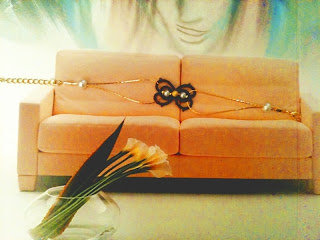 For the second swap (yes, there was a second one too), I got bolder. A white and royal blue neclace with pearls. All tatted, Ankars style, ring on ring method. It was not the first time I used this pattern. My wrist watch has it, in a more complexe variant.
There are 5 elements all put toghether. The flowers and the split chains, the lateral sides and the central element (the one from the pattern from the last blog post).
Result? 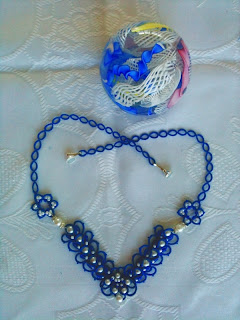 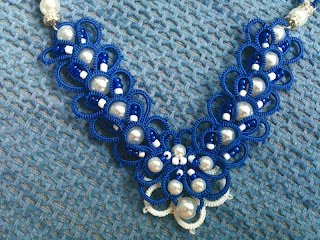 The pattern for the central part is here, I just added a small blue flower underneath, a bigger white one to give it a nice aspect on the backside too and I left 2 petals on the upper part of the element. I sewed them togheter, joined the chains with a pearl element and this was it. Chouchoutte loved it... I hope.
I forgot, of course, to write something about the technique... It was taken for some sort of macramé, not that far away, I would say, also knots, wright? And we can also finger tat...

Now I struggle with pearls... all the way... I made some test patterns, I will have to make some research if they are not already done. I miss somehow a good personal library with all kind of elements nicely organized. I always am affraid that the ideas I have may have been published already... The white flowers are similar to the camelias pattern, without the use of teh seed beads... 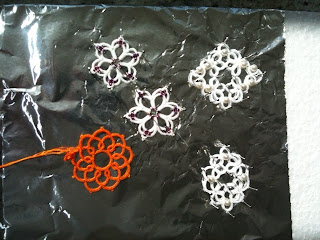 The orange flower is to be disregarded... it is just a test to see how this thread works with white glue for fixing... So far, so good.